RIM-II and RIM-I robots are designed to facilitate the custom processor IP benchmarking in the “real world” conditions.

In a sense  RIM is the two wheeled autonomous regression test bench for the dedicated application specific IP core debugging and benchmarking. 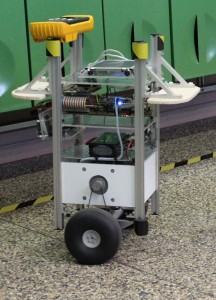 The benchmarking task logs the stimuli and the real-time benchmark data for the further analysis on the system level simulator. The offline analysis therefore, can provide the details about the computational efficiency of the CPU core, peripheral IP modules, etc.

User via the RF link and HOST software can change on the fly the test scenarios pushing the robot to the limits of dynamic envelope.

The second generation of RIM robot adds the mechanical precision and extends its dynamic envelope. The backlash problem is successfully solved by moving from the geared drive train to the timing belt driven wheel hubs. The pancake motors provide higher torque. Overall drive train has 2 times less momentum of inertia comparing to the first generation robot.

The chassis has elevated center of gravity by having all the heavy components(motors, battery, electronics) placed above the axis of rotation.

The robot electronics is based on the ROBIS platform in the following configuration:

RIM-II can transport an object of up to 3kg positioned at any point of its payload adapter (robot top acrylic sheet) with a speed of up to 5km/h uphill or downhill with the maximum ramp inclination of 15%. 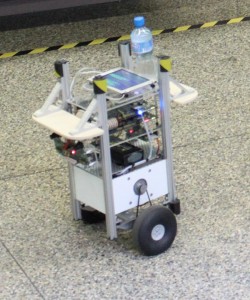 The battery capacity is sufficient to run at the full load for 1 hour. Object properties are extracted in form and color bins and superimposed on the range finding information from the stereo vision system.

Next generation robot chassis will be equipped with the 5 DOF manipulator to handle (move, load/unload) the small objects